Σου άρεσε? Μοιράσου το!
Brizoles.gr: We are located in the Vlach county in Vari, In the tavern of Chountala brothers, named “Taverna O Tsolias”. Vlach is a region that packs a large amount of taverns, One of them we distinguished because of it’s marvelous internal design. It was “Taverna O Tsolias” which is located in Leoforos Varis Avenue 45. We are together with the “leader” of the family that runs the tavern and we decided to interview him. Good Morning! How are you doing?
Uncle-John: I’ m doing fine, thank god, how are you? 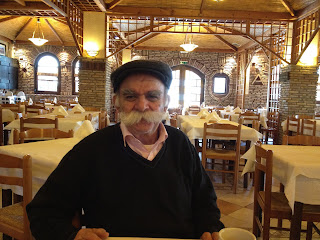 brizoles.gr: We are doing well too, thank you. Since not long ago, we have started a job, a site which is called Brizoles.gr. That site is concerning itself, only around the meat market. We would like you to tell us a few things about good meat. Not your most valuable secrets of course, just enough to inform our readers. Let’s begin with the spit–roast lamb, because Vari, actually, has had spit-roast lambs  all year long and not just, traditionally, every Easter. To conclude, we would like you to share your secrets with us.
Uncle-John: You mean, how to make it, or how to soften it etc.?
brizoles.gr: how to roast it and make it generally, how to soften it, and moreover, what is the difference between the lamb and the goat meat.
Uncle-John: How well the meat is roasted depends on the way each person handles it. If you roast it, you’ve got to tie it well first, so that it won’t turn around like crazy when you put it up to tighten it. Afterwards, you set it up on the fire, and you want to put it higher up to give it a slow warmth. When it’s warm enough, you start gradually lowering it down, depending on the fire you’ve got. Do mind the fire, as, if it is too strong it will burn the meat. When you see the meat collapsing at his leg and back, you start lifting it back up, if you don’t need to serve it right away. If you do, you just have to take it off and cut it up.
brizoles.gr: In conclusion, for a well roasted lamb, you have to start it high and gradually lower it down 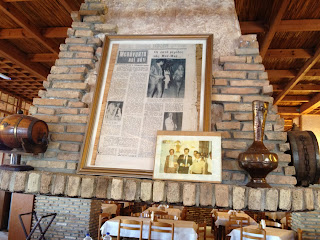 Uncle-John: Until It’s ready, yes! Of course the same goes for the goat. However, the goat comes a bit more dried up but it packs less cholesterol. That’s because it eats twigs too, not like the ewe that is usually fed with fruits.
brizoles.gr: So the actual difference between the lamb and the goat is the food they eat?
Uncle-John: Mostly yes, and it’s also in the goat’s blood. When I was guarding those, up in the mountains in Tripoli…
brizoles.gr: So you were a Shepherd?
Uncle-John: All the way to the rocks.
Brizoles.gr: Good! So we really do have the right person to enlighten us. Thank you very much!
Uncle-John: Thank you my child…
Brizoles.gr: Now, let’s share some secrets about beef steak! We don’t know many things about it, so we are asking you.
Uncle-John: look, steak, be it beef or pork, it’s about roasting it that needs attention. There shouldn’t be too much charcoal, because you may burn the outer meat and leave the inner, raw. It also depends on how the customer likes it.
Brizoles.gr: yes of course, the customer comes first.
Uncle-John: One may want it juicy, there are others who like it French, with blood inside. One round above, one round below and that’s it.
Brizoles.gr: Well, now I would like to ask you something else. We have heard (not knowing if it’s true or not) that, in order to make the steaks soft, some people add, along with the salt, a drug. Is this actually true, do you know any of this?
Uncle-John: We’ve never ever tried any of this, to tell you the truth, young man, neither we know of it. I’ve also heard of some people doing stuff like this, but we’ve never tried this, because we don’t know what that thing they put on the meat is. The thing is, the moment you buy the meat, you should know if it’s soft or not. For example, the young lamb is soft to begin with. There is also the ewe which is especially Delicious but turns out stiff. Then it is your choice to either experience the crusty delicious ewe or the sweet soft lamb.
Brizoles.gr: Talking about ewe, we have once heard from a butcher, that the animal is soft on the left side because it never sleeps from the side of the heart. Is this true?
Uncle-John: It’s true, all animals do, including ewe, the veal and the lamb. They lie down and push their body from the right side, so, it becomes stiff.
Brizoles.gr: Good, what we like most, is that we are learning these things from someone who is in the meat market since 1958, and has probably roasted more steaks and lambs we can ever imagine! Now I’d like you to tell us a few things about pork steak. Do you serve pork steak?
Uncle-John: Of Course, pork steaks and pork chops from the neck with which, we make what we call Exochiko (from the county). Basically Kontosouvli is made of lambs and ewes, but the one they name Kontosouvli here, is also the one we call Exochiko. We take the best part of the pork from its neck, put it on the spit and make it really delicious. It is our specialty here.You can also chose the stake but usually the pork is soft to begin with.
To Be Continued…

This website uses cookies to improve your experience while you navigate through the website. Out of these cookies, the cookies that are categorized as necessary are stored on your browser as they are essential for the working of basic functionalities of the website. We also use third-party cookies that help us analyze and understand how you use this website. These cookies will be stored in your browser only with your consent. You also have the option to opt-out of these cookies. But opting out of some of these cookies may have an effect on your browsing experience.
Necessary Always Enabled
Necessary cookies are absolutely essential for the website to function properly. This category only includes cookies that ensures basic functionalities and security features of the website. These cookies do not store any personal information.
Non-necessary
Any cookies that may not be particularly necessary for the website to function and is used specifically to collect user personal data via analytics, ads, other embedded contents are termed as non-necessary cookies. It is mandatory to procure user consent prior to running these cookies on your website.
SAVE & ACCEPT